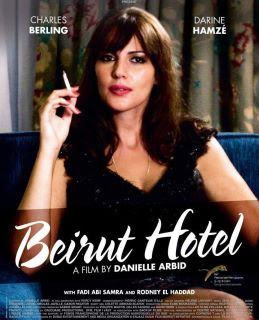 Beirut Hotel, the third long feature film by Lebanese director Danielle Arbid, is a 2011 Lebanese film. It has just been banned in lebanon. The film premiered during the 2011 Locarno International Film Festival.
Plot

One evening, a married young singer Zoha meets the French lawyer Mathieu in a night club in Beirut. Mathieu will become suspected of spying, while Zoha is trying to flee from her husband. Despite these problems, the two will witness a love story for few days mixed with violence and fear.

Here is a note from the Director about the ban:

I JUST BEEN NOTIFIED THAT MY LATEST FEATURE FILM BEIRUT HOTEL CANNOT BE SHOWN IN LEBANON ! ITS RELEASE IN BEIRUT, ORIGINALLY SCHEDULED FOR 19 JANUARY 2012, HAS JUST BEEN CANCELLED. THE CENSORSHIP COMMITTEE ARGUED THAT : "THE FILM WOULD ENDANGER LEBANON’S SECURITY."
PLEASE SPREAD THE NEWS AND MOBILIZE AGAINST MIDDLE AGES CENSORSHIP. I NEED YOUR SUPPORT…

Here is an article from The Daily Star about the movie and its ban in Lebanon:

Welcome back to spy central

DUBAI: Beirut’s reputation as a hub of international intrigue – a place populated by crafty spies, brutal intelligence agents and hapless journalists – has had a strong echo in the film made in, and about, Lebanon.

Yet filmmakers, some of them Lebanese, depicted Lebanon as spy central long before 1975. Witness Mohammad Salman’s “The Black Jaguar.” With its muscle cars, smart suits, swinging, sex-drenched lifestyle and Stratocaster-driven theme music, this 1965 Lebanese feature looks like a James Bond rip off. This all makes it both awful and awfully fun to watch.

Echoes of the 60s-era Beirut spy thriller are evident in “Beirut Hotel,” the 2011 feature by Lebanese writer-director Danielle Arbid, which just screened as part of the feature film competition of the Dubai International Film Festival.

The film centres on the story of Zoha (Darine Hamze) a torch-song singer who – backed by Marc Codsi and soundtrack composer Zeid Hamdan – performs reworked Arabic-language classics in one of Beirut’s 5-star hotels. She’s estranged from her thuggish husband Hicham (Rodney El Haddad) who cheated on her after a few years of marriage.

One evening Zoha encounters a mysterious Frenchman, Mathieu (Charles Berling). She is both attracted to Mathieu and repelled by him but, as you might expect, they end up in each other’s arms soon enough and – once it’s been established that he’s divorcing his wife – enjoy healthy sex.

It turns out Mathieu’s a lawyer who’s nowadays in the employ of a French oil company negotiating a contract in Syria. A couple of years before, he worked for the French government, to rescue the son of a diplomat who’d been arrested with a cache of heroin in hand.

This assignment drew him into the Lebanese demi-monde, assisted by Abbas (Fadi Abi Samra). A member of a large drug-smuggling family from Lebanon’s rural Bekaa, Abbas is comfortable navigating the marchlands between legality and illegality.

Abbas wants to renew his business relationship with Mathieu. He says he knows a guy who was the friend of the suicide bomber who assassinated former Prime Minister Rafik Hariri. He wants to sell this information to the French government in return for a visa to France. He isn’t a traitor, he insists, but finds himself being threatened by unspecified seedy elements, who accuse him of being a spy for Israel.

Mathieu insists he has no intimate connections with French intelligence, but he does speak to someone at the French embassy on Abbas’ behalf.

In no time at all Mathieu is carrying a double tail – being followed both by Hicham and by a pair of harmless-looking guys who turn out to be agents of Lebanon’s security apparatus (at times they seem to be from General Security, at others the Internal Security Forces).

In an inspired comic moment, one of these fellows pulls out his pistol to save Zoha from a Lebanese jagal (Karim Saleh), as Lebanese rakes are called, then orders him to do up his shirt buttons for good measure.

From this point forward Mathieu and Zoha’s romance, the real center of the film, is thrown into uncertainty as he is at various stages threatened by Hicham, Lebanese security agents and Abbas himself.

A co-production of Lebanon’s Orjouane Productions and the Franco-German television network Arte, among others, “Beirut Hotel” had its world premiere in the competition of the Locarno Film Festival earlier this year.

There is a strong element of genre in “Beirut Hotel” and, on balance, it’s more gripping than boring. The film doesn’t simply reproduce the genre formula, however, but unhinges it even as it works within its conventions. There is some precedent for this in Arbid’s previous works.

“In the Battlefields,” her debut feature, tells a story from Lebanon’s testosterone-driven civil war from an adolescent female perspective. Similarly, “Beirut Hotel” can be read as a contemporary update of the political thriller.

Arbid’s new film is more interested in its self-possessed female lead than it is in manly spies. Indeed, the foreigner who’s accused of being a spy isn’t a spy at all. Instead, the film works with the tropes of spy movie and film noire to mythologize Lebanon’s contemporary political realities.

Arguably, it’s a mark of Arbid’s success that Lebanon’s censor last week decided to ban “Beirut Hotel,” whose theatrical release was scheduled for next month. Arte is slotted to air the film on January 20, 2012, with, by producer Sabine Sidawi’s estimates, an audience of some 1.5 million viewers.

Based on Sidawi’s press release, General Security’s censorship committee argued that “The film’s depiction of the political situation would endanger Lebanon’s security” and that all sequences mentioning the 2005 assassination of former Prime Minister Rafik Hariri should be removed.

For the record, in a tweet dated “12/15/11 8:27 p.m,” MP Saad Hariri, the son of the assassinated former prime minister and the present leader of his Future Movement, wrote that “I have nothing to do with [“Beirut Hotel”] being censored, and I believe its a crime against freedom what they did.

In an interview after the film’s Middle East premiere, Arbid stresses that her film was neither documentary nor reportage and that, as such, it contains no revelatory information about Rafik Hariri’s assassination.

“I wanted to make a genre film,” she says, a film that works with Lebanese realities. “It’s a paranoid film, a film about suspense and betrayal.”

The writer-director says that Lebanon’s censor wanted to delete parts of her film, a demand that she resists as a matter of principle.

“I refuse to allow my film to be cut after shooting,” she says. “This idea, which has become normal in Lebanon, doesn’t exist elsewhere in the world. Either you rate the film [PG, R, PG-18, etc] or ... you ban it. You don’t cut it.

“They aren’t producers, the people in General Security. They don’t give us money [and so have no rights] to the final cut.”

Arbid’s previous work has also run into problems with the censor. While her 2004 feature film debut “In the Battlefields” was rated PG-18, authorities demanded she excise several parts of “A Lost Man” (2007), her second feature, which consequently has never had a theatrical release in Lebanon.

“But for ‘Beirut Hotel,’ this isn’t a moral battle. It’s a battle of principle. There is nothing offensive in it. We don’t accuse anybody [of anything]. We don’t insult anybody. We don’t work for anybody. We don’t speak about religion. There are a few sensual scenes. If they want to rate them, okay, rate them. But cutting? No.”

“It’s important to note that the film is programmed to be broadcast on Arte at 8.30 p.m.,” says Sidawi. “That’s prime time. If there’s something in it that’s shocking for viewers, they wouldn’t slot it at 8.30.”

“The film is going to be screened theatrically in ten other countries in Europe, Turkey and Latin America,” Arbid continues. “There is a Middle East distributor too, though we don’t yet know where it’ll be sold.”

“Ten times they asked [Arbid] to come back to speak about the film,” Sadawi says. “Several times they said, ‘This is a very dangerous film.’ They think it may push people to do something like 7 May [2008].”

“The problem is that they’re not realising the difference between a film and reality,” Arbid continues. ... None of them have studied art. I want to talk to people who know cinema. I don’t want to talk to a guy who says, ‘Ah you said something about Hariri!’ Yes let’s take any newspaper today and see how many times the word ‘Hariri’ comes up.

“They have the right in Lebanon to put you as a laboratory rat and to serve you their bull**it. Any guy can go on television and say ‘I hate the other guy’ or ‘You should hate your neighbour’ because he’s different, because he’s from another religion, because he’s from the 8 March or 14 March.

“The way they express their hatred of people, this is allowed. You, the Lebanese people, should accept what they say. We should hear them on television and on radio and read them and give them two hours of your life every day to their bull**it.

“But when you make something of it, when you use it as material for art, they go crazy. If you [reflect] what they say back upon them like a mirror, they say, ‘How can you do this? You’re just the subject. You have to shut up and listen to us.”

“The problem is that the whole of General Security, they know more than the director,” Sidawi says. “They are more intelligent, more artistic. This is why they help the director make a better movie ... They treat us like dogs.”